A Tribe Called Red – A Tribe Called Red (Download Here)
A combination of Dubstep and traditional native songs, innovators A Tribe Called Red has been labeled Pow Wow Step and hailed by critics as both an audio and visual phenomenon. You can find A Tribe Called Red on repeat around Sol Collective. Bass rattling beats weaved with a message of cultural activism; you will not regret this download. We guarantee it.
Listening Tip: Although the album is full of individual tracks that are heat on their own, we recommend taking a listen to this album from start to finish as one song builds into the next to unravel the whole story.

Zuzuka Poderosa and Kush Arora – Carioca Bass Mixtape (Download Here)
The queen of Brazilian Baile Funk is back with her new Carioca Bass Mixtape. Her brand new mixtape features some of her classic tracks mixed together with new tracks from her upcoming ‘Carioca Bass EP’ by Kush Arora (release Spring 2012). The tape features exclusives from DJ Edgar, Sany Pitbull, Stereotyp, Jumping Back Slash, as well as hot tracks by friends like Spoek Mathambo, Los Rakas, Dizzy Wright, Poirier, 5kin and Bone5, Gnucci Banana and more!
Listening Tip: Be sure that you are not in a confined space when you listen to this album because you will need all the space you can get to dance.

Raka Dun- No Tan Listo (Download Here)
Raka Dun, one half of Panabay duo Los Rakas, is back with an anthem for the dancehall. “No Tan Listo” has an infectious 808 rhythm and Dun drops the rugged Central American flow that has earned the Rakas recognition from the Bay Area to Brooklyn.
Listening Tip: If you like that, go to LosRakas.com and check out all the other free music they have available. There’s always some new music up on the Rakas’ page. 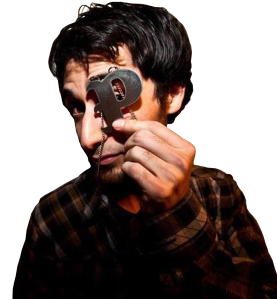 Sonora- Call Me a Yardie (Stylo G Remix) (Download Here)
The Peligrosa vet is back with a remix strictly for the dancehall. Remix master Sonora drops his version of Stylo G’s Call Me A Yardie free on his soundcloud page. This is the latest remix, but if you scroll down the page, Sonora is one of the hardest working DJ/Producers in the global bass scene and always has some new music including remixes of Diplo, Los Rakas, and our own World Hood.
Listening Tip: Don’t stop at the Stylo G Remix. This Soundcloud is a gold mine. From party rocking to kicking back, Sonora’s got the soundtrack. And it’s probably available for free download.

Mandeep Sethi- Ajna Chakra (Download Here)
Los Angeles lyricist Mandeep Sethi brings 17 tracks of raw consciousness with Ajna Chakra, available for free download now on his bandcamp. The Slumgods representative’s lyricism and wit is reminiscent of Eyedea with a New Delhi twist. Ajna Chakra is sure to be a hit with hip hop purists from Oakland to Mumbai. Sethi also has a bunch of other music available on his bandcamp. Go download it now. What are you waiting for?
Listening Tip: This is not one of those “the beats bang so I put up with the lyrics” albums. Ajna Chakra has a few slappin’ singles, but deserves an attentive listen to in its entirety. The album reads like a novela with every song being a different chapter documenting the journey from Los Angeles to the Mumbai. Perfect soundtrack for that drive from Sac to the bay or your next international flight.

Error: Twitter did not respond. Please wait a few minutes and refresh this page.